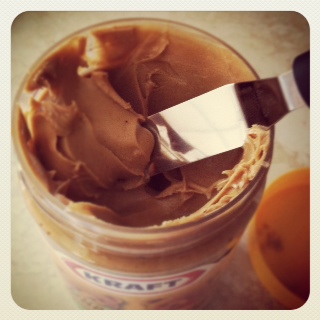 Words are pretty cool. Some more than others.

For example: “litany” rolls of the tongue far nicer than say, “garbanza“.

And “kaleidoscope” is simple auditory deliciousness. More so than “vestibule“.

You know you say lobby. Even when you are technically meeting up in the vestibule.

My favourite word to pronounce looks more like a phrase than a word. It isn’t even an English word.

Although many, many words in the English language have been assimilated from other languages. So really, this one should be up for everday Anglo-speaking consideration. Because it’s cadence is almost sensual. Ya that’s right…I’m likening the sound of this word to arousing gratification. The earworm kind – not that kind. Sheesh.

Ready for the word? Okay, here it is:

Ya, that’s right. Peanut butter is my fav word to say.

Now go ahead – whisper it. Doesn’t it sound exotic when pronounced en français?

Do you have a favourite word? Maybe one that brings back fond memories of childhood or that you think is just really fun to say? Or wait – do you think the whole idea of having a favourite word is just a little bit coo-coo?

6 Responses to “Auditory deliciousness in a word”