I’m a huge online shopper, much to my husband’s chagrin. I love the convenience of it. Especially when it comes to purchasing clothes for Sweet Girl.

I know her size, I know what she needs. Why would I lug myself (and potentially herself) down to the mall when I can buy what she needs in under 2 minutes.

For this reason, I shop at Old Navy a lot. They email me deals almost every week and they have a great selection to choose from.

But I’m funked out at Old Navy, and here’s why. The other day I clicked the Halloween costume section of their website and the first thing I noticed wasn’t the cute costumes.

It was how Old Navy divided the costumes up.

These costumes are for Girls: 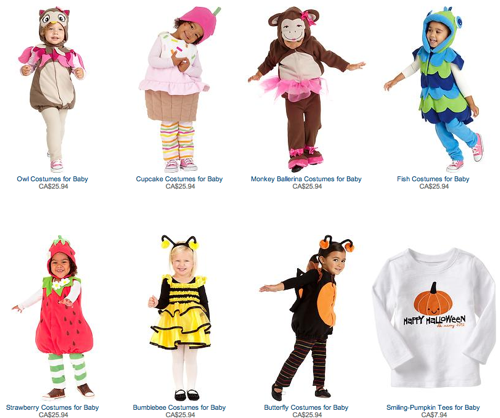 And these costumes are for Boys: 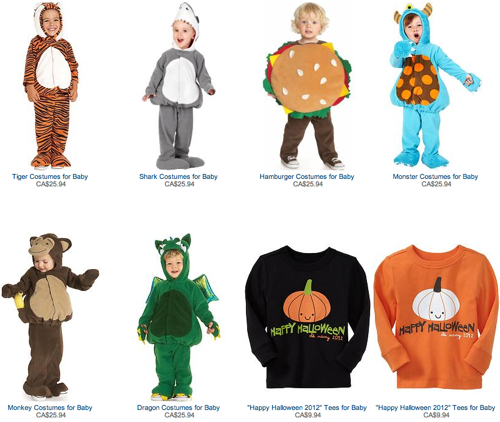 Why does Old Navy divide toddler Halloween costumes by gender?

Now I get it. This is an e-commerce site. Merchandise is organized to help me shop. Help me click Add to Checkout that much faster.

But is it really necessary to organize toddler Halloween costumes by gender? Really? C’mon Old Navy.

Of course, if Sweet Girl wants to be a shark for Halloween, there’s nothing stopping her. Same goes if a little boy out there decides he can rock a bumblebee costume like nobody’s business.

What I don’t like is the implied gender divide this boy-girl categorization makes. It niggles at me. It feels wrong.

So I tweeted about it.

why does Old Navy divide toddler Halloween costumes by gender? so boys can be tigers, sharks, robots but girls cupcakes & bumblebees etc?

Kamerine (aka @lifeofk) pointed me to a post by @naturalurbanmom where she asks the same thing (it’s actually a follow up to an earlier post on this same subject).

And then coincidentally, I read a post by @Karen_C_Wilson where she talks about the reaction she got on Facebook when she shared a photo of her boy dressed up in a princess costume (he rocked it of course).

A little confession here…I remember when Karen posted that photo to Facebook. I was uncomfortable when I first saw it. I forced myself to consciously recognize and process that feeling. I then discarded it as utter bull.

If I want to defend my daughter’s choice to dress up as a monster or play with a firetruck, who am I to be uncomfortable with a boy exploring his own interests too?

We should be encouraging children to go ahead and play. To have fun.

Sure there are gender differences. I’m not discounting that fact. However, it’s not something that needs to be defined by a Halloween costume. Or dressup fun. Or play in general.

By defining toys and costumes as “boy” or “girl”, we make play – we make selecting a Halloween costume – a gender decision. And that’s the silliest thing ever.

8 Responses to “Let the girl be a shark already, and the boy a bumblebee”