I was going to start this post swearing but I’ve held my inner swear demon off. I try not to cuss on social media. Sometimes it’s hard because…um…I cuss in real life. Not all the time and in all situations but I’ve certainly been known to drop a four-letter word now and again.

I’m not against profanity in writing. Not at all. I think when done well, dropping an f-bomb or whatever can enhance rather than detract. Just look at The Bloggess. Honestly, her regular use of “choice words” cracks. Me. Up.

Ooh! Or Erika Napoletano. She’s got it right; regular use of the f-bomb and being a good person aren’t mutually exclusive.

That said, it’s not a style of writing I’m looking to develop. (Do I know my writing style? Ah, question of the ages…)

The focus of this post, however isn’t supposed to be on the merits (or lack thereof) of using profanity in writing.

Nope. The focus is on how life isn’t fair.

This isn’t a boo-hoo, first-world-problems discussion of unfair. This is about relationships and trying, trying to do the right thing.

Last year I described myself as sincere. In a broader context, that post was about self-interrogation. The power of delving, digging into who you might think you are, and what surprises you may find as a result.

People — if you let them — have a tendency to take. Without a whole lot of regard for the person doing the giving.

We’re taught from a young age to turn the other cheek; stand on higher ground in a given situation. Doing so will provide us a sense of emotional peace when dealing with asshats. Or at least a broader perspective of said situation with said asshat.

But sometimes the higher ground doesn’t get you anywhere. Sometimes that emotional stink bomb you were thrust into…still stinks from way up high.

I’m tired of those emotional stink bombs. I’m tired of pussy-footing around the people setting them off. I’m tired of not being able to be sincere in my thoughts and feelings about certain situations. Certain people.

I get the whole “be a reed bending in the wind” metaphor. I really do. But sometimes enough is enough. And bending isn’t the option or way forward. Sometimes you need to set a new path. Set new boundaries.

We’ve all got problems. Hardships large and small. That’s right. Life isn’t fair. So what.

I wonder why some people feel this offers them the excuse to treat others badly. Or to act in bad form. To take others for granted. To feel superior.

I wonder…if these people conducted their own self-interrogation if they would really like what they discover. If they’d be at all surprised.

My husband tells me that I expect too much from people. He might be right. If I’m sincere with you, I expect you will be the same with me. Why is that so unreasonable?

Avoiding asshats and their asshatted tendencies altogether is impossible. I can however focus my energies on the people who appreciate and value my sincerity.

And if the asshats have a problem with that? I don’t give a…well, you know. 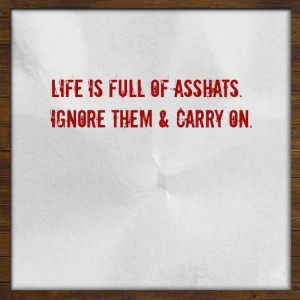