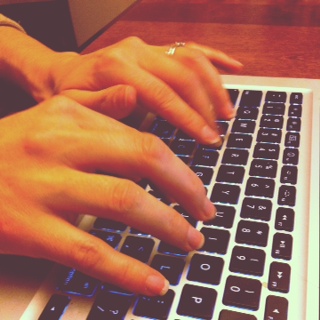 Blogging is such an interesting outlet. I’ve been writing almost my entire life (short stories, poetry, journaling) but nothing compares to blogging.

I’ve been doing it for about seven years now on sites across the Interweb. Most of it in a professional capacity – blogging as part of my job. It’s my favourite part of the work I do. It’s my passion.

Which is why you’d think I’ve blogged a lot longer in my personal life but not so. I’ve only really been doing it steadily since 2009. And it all comes down to a struggle to find my voice. To see the words on the web page and say yes, this is me. And know it.

One of the most impactful experiences in terms of defining my approach to this blog is the first Blissdom Canada conference I attended back in October 2010. I had such a great time at that conference and I learned so much.

Prior to Blissdom Canada I didn’t know what I wanted to write about. I didn’t write all that regularly and what I did write wasn’t all that personal. But that conference was so motivating. I met these amazing women who were doing so many cool things and I took inspiration from them.

I had three goals coming home from Blissdom Canada:

While I’ve made progress on the first two goals to some degree at least, it’s the last one that’s got me stumped.

I feel sometimes like I’ve almost got it but not quite. The words I want to use and the points I want to so eloquently make are just out of reach. I mean, the damn thesaurus and dictionary are right here but still. I can’t quite get the pieces of the story sorted and so the words jumble together in a disjointed marriage of thought.

Other times the words flow and I don’t understand how or why. They simply come naturally.

And the funny thing is that the harder I try to find that perfect flow the harder it is to write. The stupid cursor just blinks at me with doleful contempt.

In the instances where the words seem to leap from my brain to the page – those are the posts that have received the most comments. Like ya, I hit a nerve here. Not in a bad way but in a way that invites people to read and respond.

So here’s what I’ve figured out. When I take the leap to share something close to my heart, to open up and give a piece of myself here, the words aren’t that hard to find. The journey then isn’t so much about finding my writing style as it is finding the truth of the words I share. Not truth in the general sense but the truth of my life experiences.

But it’s through this journey – and through reading other blogs – that I’ve learned it’s the only way forward.

2 Responses to “Shout it from the inside”